Peter Tomasak, Co-Author of ‘The Fishing Creek Confederacy: A Story Of Civil War Draft Resistance’ speaks at the Taber 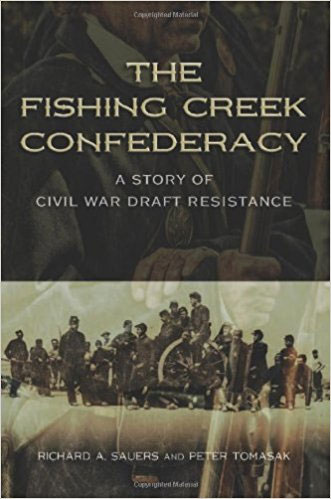 The Thomas T. Taber Museum of the Lycoming County Historical Society hosted its Society Program on Sunday, September 16 at featuring Peter Tomasak, co-author of the book The Fishing Creek Confederacy: A Story of Civil War Draft Resistance. The book was released in October.

As the battles of the Civil War continued for months, and then years, many Union sympathizers tired of the imposed draft. Several like-minded men gathered at the barn of John Rantz near Fishing Creek to discuss an appropriate response. Word leaked out that an ‘uprising’ was being plotted. The Federal Government deployed 800 troops to Fishing Creek in August 1864. Forty-four males were arrested, some as young as 14 and some as old as 75. They were marched to Fort Mifflin, some not surviving the march or the subsequent incarceration. The arrested men had no access to civil courts, instead, they were tried in military courts. In 1866, the United States Supreme Court declared military arrest and trial of civilians unconstitutional.

Tomasak has been writing professionally since 1995, with five books and more than half a dozen magazine articles to his credit. He has been researching the Civil War and the local history of Luzerne, Columbia and Sullivan Counties since 1973. Co-authored with Dr. Richard A. Sauers, The Fishing Creek Confederacy was produced in an attempt, according to Tomasak, “to write a comprehensive, complete and concise history of how the elite took advantage of the undereducated of the area and incense them with rhetoric that was almost impossible to not get overly excited and defensive about.”

Nineteenth Century Bottles Topic of Conversation at the Taber