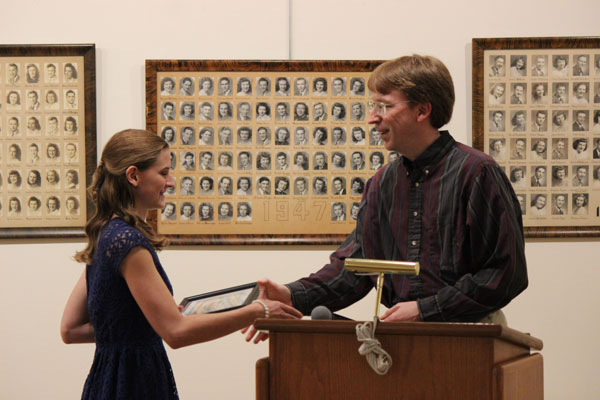 The Lycoming County Historical Society recognized its volunteer of the year at the 2017 Annual Meeting. Alicia Skeath was the choice. The award was presented by Curator, Scott Sagar.

Alicia is finishing her junior year as an Art History Major at Lycoming College, with a minor in American History. She hopes to acquire the necessary skills to work as a Museum Curator at an art museum. The daughter of Fred and Lori Skeath, she hails from Wapwallopen. In her spare time, she performs in the Repasz Band, loves to swim and fish (and has served as a lifeguard) and enjoys going to museums.

She began her time at the Taber Museum last summer, as an intern through the College’s WISE program (Williamsport Internship Summner Experience). Much of her summer was spent helping to catalog many of the recent donations that were awaiting some extra hands to assist with processing. These included a large selection of South Williamsport School District photographs, over 600 slides documenting Peter Wolf Toth’s carving of Chief Woapalanee, and jeweler Robert Ulsamer’s engraving equipment, for which she did research to figure out the function of each part. Alicia also processed several large manuscript collections, and tackled such diverse materials as souvenir spoons, medicine bottles, political campaign yard signs, World War II ration books, and many others.

After her internship was over, Alicia came back as a volunteer during the school year and picked up right where she left off, researching and cataloging a suite of J. K. Rishel furniture, and most recently processing a very large manuscript collection from the Lycoming
Chapter of the DAR. She has also gladly made herself available to help with programs, exhibits (including writing the label for the William Penn soup tureen on display in the Art Gallery), and any other random tasks that arise. Alicia has been a true asset to the Historical Society throughout her time here.

Development Director Search is Underway!
Credit Union Relationship Adds Value to LCHS Membership
New Faces on the Board of Governors